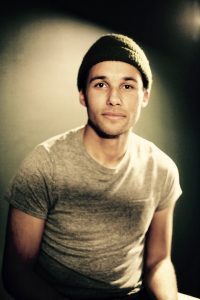 Coming from a musical family and growing up in  the Chicago blues scene, James brings a soulful voice and his songwriting skills to all the way to L’Ane Vert. Hoping to collaborate with local artists during the month to find new sounds and African influences.

Having spent many of the last few years supporting other artists on tour, James will be using his time here to acknowledge and explore an unwavering desire he has had to breakout as a songwriter and artist. His hope is to take this time away from the demand of the road and the competitive scene of Los Angeles to spend his energy gathering unfinished pieces and creating new songs inspired by his surroundings.

James grew up musically inspired by a wide pallet of music- from the blues scene of Chicago, the city he grew up in, to traveling internationally with his father who sang opera professionally and his mother, a music teacher. He grew up with an open door to exploring music, singing, writing, and learning to play any instruments he had access to. He went on to study jazz guitar at the University of Michigan, and there, playing in a number of bands, he began a career focused on the bringing to life of songs. Since, he has enjoyed the cycle of collaboratively writing, recording, and performing music- leading him to Los Angeles where he has now lived for two years, spending much of his time touring the United States and Europe.

Some of the artist James collaborates with most closely with can be found on all musical platforms: Theo Katzman, Joey Dosik, May Erlewine, Antwaun Stanley, Anna Ash, Julian Allen, and Madelyn Grant.